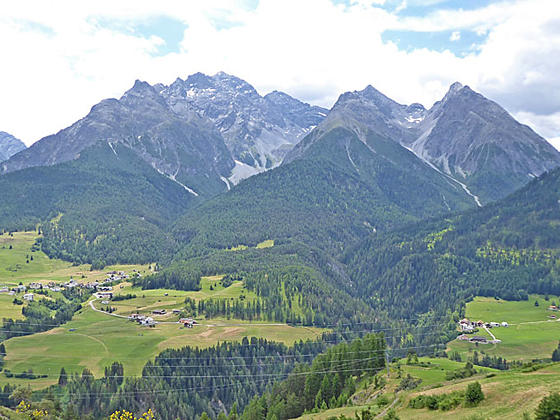 View of the Piz Minger massif

This interesting walk travels along sunny benches and gentles slopes high above the north side of the River Inn (En in Romansh) in the Lower Engadine Valley. The path follows farm tracks and trails through meadows and forests, passing through charming villages with traditional houses decorated with sgraffiti (plural of Sgraffito), a decorative art form popular during the 17th and mid-18th centuries.

The hike, passing through Guarda, Bos-cha, Ardez and Ftan before reaching Scuol, can be done in either direction and is easily shortened by starting/ending the hike in Ardez or Ftan. The trail is a great option for anyone looking for an easy day or if the weather precludes hiking at higher elevations.

Plan on more time than the mileage implies. Hikers will be tempted to explore the villages to see the wide variety of sgraffiti, browse through some of the interesting shops and enjoy one of the restaurants before continuing to the next destination.

There is a lot of up and down along the hike, more than the net difference between the high and low point in the trail statistics. Over the length of the hike the trail gains over 1,500-ft. and loses more than 2,200-ft. Except for the final 1,190-ft. drop to Scuol, the elevation gains/losses are on easy to moderate grades.

Walking from Guarda to Scuol

The day starts with a train and bus ride to the village of Guarda. (See trailhead directions below.) The well preserved village is filled with beautiful, traditional Engadine houses adorn with sgraffiti, a technique where the top layer of plaster is scratched or incised with a design, revealing a lower layer of plaster in a contrasting color.

Walk east along the main road through the village toward Bos-cha and Ardez on the Via son Giachen (Route #43). Signs at the bus stop will help get you started. As you wander through the town enjoy the wide range of sgraffiti designs on the homes lining the street.

At 0.25 miles reach a junction at the east end of the village. Bear left on the road, signed for Route 43, toward Bos-cha and Ardez. Ahead are views of the small village of Bos-cha set against a backdrop of rugged peaks rising above the south side of the River Inn in the Lower Engadine Valley.

Reach the small village of Bos-cha at 1.1 miles. To the west the high peaks rising along the Fluela Pass Road dominate the views. At the east end of the village signs now point toward Ardez and Ftan.

Beyond Bos-cha the path descends on moderate to easy grades through pastures and scattered trees with views up Val Nuna. Piz Nair, Piz Zuort, Piz Minger and a host of rugged peaks fill the skyline to the southeast. Soon views open to Ardez and the ruins of the Steinsberg Castle.

Reach Ardez at 2.7 miles. The path now winds through the village, passing many traditional homes decorated with sgraffiti. One very interesting structure is adorned with an elaborate mural of Adam and Eve in the Garden of Eden.

Ignore a sign telling you to turn left and instead continue along the road.  At 3.0 miles reach a fountain in the middle of a square situated right below the castle ruins. Here a path branches right and climbs to the ruins set atop a knoll. The ruins include the 4-story castle keep (tower) and an interesting smaller ruin. The knoll boasts fine vistas stretching up and down the Lower Engadine Valley along with birds-eye-views of Ardez.

Ardez is a convenient spot to cut the hike short. Simply walk south through the village to the train station located on the valley floor. Here trains head east to Scuol and west toward Landquart and Pontresina (St. Moritz).

When you are done exploring the ruins, return to the square with the fountain and follow the road heading northeast. Soon you will see a path, marked for Ftan, branching left (north) and ascending through pastures. Reach a junction at 3.5 miles and bear right (northeast) on the path toward Ftan, Alp Valmala and Route #43. Turn around for views of the castle set against a backdrop of the peaks lining Val Sampuoir across the valley.

At 4.0 miles reach Ruina Chanoua, the ruins of an old tavern. Beyond the ruins the trail curves to the left (north) and soon joins a road. Follow the road as it travels up the west side of Val Tasna (Tasna Valley).

At 4.7 miles the road crosses the Tasnan River on a bridge. On the east side of the river we turn left (up the Tasna Valley) on a track signed for Alp Valmala, Ftan and Route #43. A short distance beyond exit the track by turning right (east) on a trail signed for Ftan and Route #43. Ftan is painted in red and white letters on a large rock at the intersection. (The track continues up the valley to Alp Valmala.)

Our path climbs through trees, heading south/southeast. Soon the trail exits the trees and curves to the left, leaving the Tasna Valley. We now head east/southeast, traveling through pastures and scattered trees toward Ftan. To the south views open to Piz Minger and the summit towering above the west side of the S-charl valley, a tributary valley branching south from the River Inn.

At 6.1 miles the trail reaches a paved road. Turn right, following the road for a short distance before turning left on a secondary road that continues east/northeast toward Ftan. None of these roads have much if any traffic.

This section of the route enjoys great views of the Piz Minger massif and the high peaks rising above the south side of the Lower Engadine Valley. As you progress up the road you will start passing houses and soon reach the old section of Ftan called Ftan-Grond at 6.8 miles. (Ftan is composed of two connected villages; Ftan-Grond and Ftan-Pitschen to the east.)

Take some time to explore this pretty village set atop a sun drenched terrace. Of particular note is the church tower, separated from the main church building, and the large houses with the barns on the bottom floor.

Ftan is another spot to cut the hike short. The bus stop is located in the center of the village adjacent to the Post Office. Regularly scheduled buses head to the Scuol Train Station and then make a number of stops along the main road through Scuol.

When you are done exploring the village, return to the village center and head northeast, following the signs pointing toward Scuol/Route #43. Reach Ftan-Pitschen at 7.25 miles. From the village views stretch south to the Tarasp Castle, set atop a hill along the valley floor on the south side of the River Inn. Piz Minger, Piz Zuort, Piz Pisoc and Piz Lavetscha tower above the castle to the south. Piz Plavna Dadaint, Piz Plattas and Piz Nair rise above Val Plavna (Plavna Valley).

Exit the village on a broad track that descends on easy to moderate grades through pastures with panoramic vistas of the peaks to the south. Along the way views open to Scuol sprawled along the valley floor.

At 8.2 miles the grade steepens as the track drops off the terrace.  Turn right at 8.7 miles on a signed trail that descends steeply to Scuol. Near the end of the descent the path passes the Motta Naluns cable car station and then turns right, dropping down to the Scuol-Tarasp train station at 9.4 miles. Here you can follow the Via da le Staziun down to an intersection (traffic circle) with the main highway through the valley. Carefully cross the intersection and continue along Via da le Staziun, which passes through the center of Scuol.

Scuol, the capital of the Lower Engadine region, is a delightful place to explore. It includes a wide selection of restaurant and shops along with beautifully preserved traditional homes and a pretty church set atop a scenic knoll.

From Scuol to Guarda: Take the train from Scuol in the direction of Pontresina or Landquart and get off at Guarda staziun (station). The ride takes about 12 minutes. Note: Guarda is a “stop on demand” station. Listen for the conductor to announce the stop. He/she will tell you it is a stop on demand. You must then push the “Stop on Demand” button, typically located near the door, to signal to the conductor that you wish to get off the train in Guarda.

Guarda sits atop a bench high above the north side of the Lower Engadine Valley. At the Guarda staziun change to the minibus that climbs to the village in 8 minutes. Depending on the time of day, you will either need to wait for 5 minutes or 18 minutes to catch the bus.

You can also walk to the village up a very steep trail climbing through pastures or ascend on the road. (Follow the signs behind the train station.) I recommend taking the bus, which eliminates a 1.7 mile walk that gains over 700-ft. in elevation.

From Ftan to Scuol: From Ftan, Cumun post bus stop, located in the center of the village adjacent to the Post Office, board a bus bound for Scuol. The ride will take 12 minutes to the Scuol Train Station. The bus continues beyond the train station, making a number of stops in Scuol. Consult the SBB Website/SBB app to find the stop nearest your accommodation.